Do you own a cast iron skillet?

If you don’t, you should!

Before I get into how to clean this amazing kitchen tool I would like to share with you some of the health benefits of cooking with cast iron pans.

You might be thinking at this point, is there a down side to cast iron?  No, as long as it is properly taken care of.  You can’t stick it in the dish washer.  You shouldn’t even use soap on it.  Just hot water and some coconut or vegetable oil.

If you happen to have a cast iron pan that hasn’t been loved in a while, here is how you get it back to tip top shape!  It makes a bit of a mess so I suggest putting down some newspaper and doing it outside. 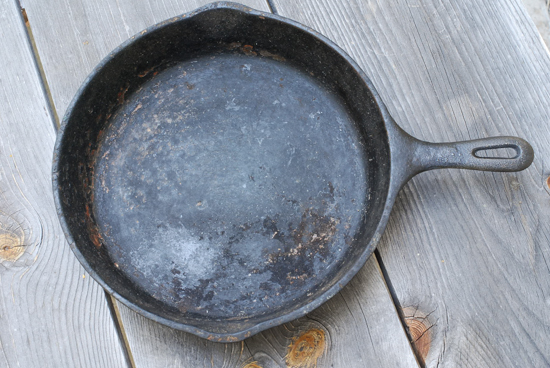 What you need: Course salt, vegetable oil and a potato.

With 2 racks in the oven, place a piece of foil large enough to cover the skillet on the bottom rack.  Pre-heat the oven to 400 degrees.

Cut the potato in half.  Add a handful of course salt into the skillet.  Using a circular motion, rub the potato cut side down on the pan.  Once the salt gets really dirty throw that salt out and start over again with clean salt and the other half of the potato.  Continue until your skillet is as clean as possible.

Once it is clean, rinse with water and pat dry.  Place the skillet on a burner on top of the stove over high heat to make sure the skillet is completely dry.  When the skillet has cooled to the touch, place a small amout of oil into the bottom of the skillet.  With a paper towel, spread the oil around so it completely covers the whole skillet.

Now place your skillet upside down on the top rack of your pre-heated oven for 1 1/2 hours.  Onced cooled, remove from oven and wipe out any excess oil.  You have now successfully seasoned a cast iron skillet that you will be cooking with for years to come.

I have just the thing to make in your newly seasoned skillet Cast Iron Pan Pizza. 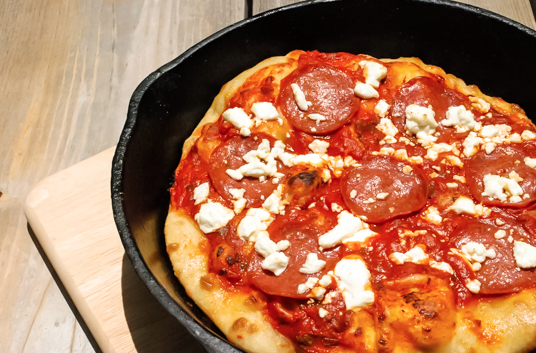 Now to keep it seasoned, never, never use soap to clean it.  Hot water and a stiff brush.  I always add a little oil to the inside of the skillet before I put it away.

If you don’t have a cast iron skillet you can get one here.

15 thoughts on “How To Clean A Cast Iron Skillet”